This is a review and detailed measurements of the Benchmark AHB2 Amplifier using THX technology to reduce distortion. I was going to request one for testing due to membership demand but to my pleasant surprise, the company volunteered to contact me and send not one, but two units! I requested the second one because of something I was seeing in the measurements that turned out to be my issue, not the amp's. The AHB2 retails for US $2,999 from the company direct.

The AHB2 is a very compact form factor, enabled by use of switching power supply to increase efficiency/density:

There is just a power switch in the front. It might be but I constantly reached for the screw next to it to power it on! Having the power switch be slightly different color or shape may help with this.

There are a set of LEDs that show the status of the amplifier. They are driven by an FPGA (field programmable digital logic) that monitors all aspects of the amplifier and shuts down the unit if stressed. It did so very quickly and efficiently in my testing. Usually this is done with purely analog or maybe a small microprocessor. As such, the coverage of scenarios that could damage the amplifier is much less complete than using the approach Benchmark is using in AHB2.

Here is the back panel:

This is a very minimalistic approach given the small amount of real estate available. Only input is XLR balanced which is just fine in my book. A gain switch allows the input level to be controlled so that you can just use an RCA to XLR adapter and still get full power (2 volt max in high gain). At the other extreme, the low gain setting is designed for professional pre-amps with lots of output, getting its max power at 9.8 volts. Using this scheme, the signal to noise ratio can be improved as you will see in measurements later.

For speaker terminals there are two sets: classic heavy duty banana jacks and SpeakOn. The SpeakOn are locking and provide the best performance. I lost about 3 dB of performance using the banana jacks due to less secure connect there. So the measurements you see are with SpeakOn jacks.

Another minor nit on that note: I had a rather cheap SpeakOn cable and its plug was just large enough to hit the silver screws that the sockets are mounted with. Typical round shaped SpeakOn ones are not an issue. Flush mount screws would solve this problem.

There is a switch for selecting stereo or mono bridged output. The latter quadruples the amount of power available and unlike typical bridging, according to Benchmark comes at no penalty in distortion! I plan to test this later as it has a minimum impedance of 6 ohm so I could not use the 4 ohm setup I used for this testing.

There is a very beefy AC mains cable with really nice locking tabs. Insert it and it stays put unless you push the two red tabs on each side. Nothing is more aggravating than the AC cable coming half-way lose from the IEC socket.

Being a proper company of course the AHB2 comes with full set of regulatory/safety/emissions certifications which is super important with power amplifiers given the high voltages and currents running around in them.

In use the AHB2 stays very cool for a power amplifier when it is idling, outputting little power which was a nice surprise.

As to THX technology, it merges a low-power but very low distortion amplifier with a high power but higher distortion amplifier. The distortion of the latter is not seen because it is producing so much power (so the ratio of distortion is lower). The general scheme is not new, dating back to 1980s but new implementation is. We have seen this in stellar performance of Massdrop THX AAA 789 amplifier which broke new ground in level of distortion and noise. Will the Benchmark AHB2 manage the same? Let's see. 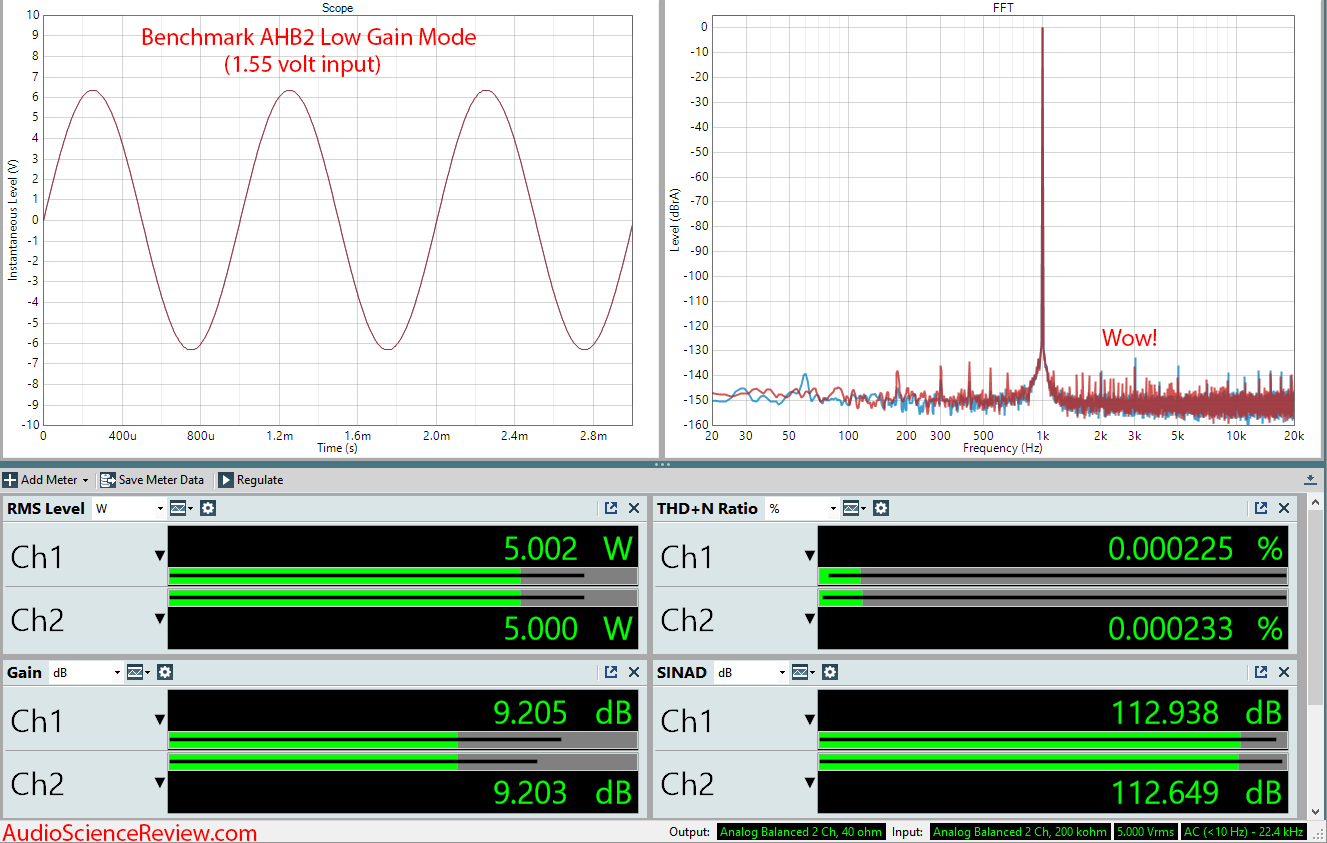 I hope your jaw is on the floor just like mine was when I saw this picture emerge! 113 dB THD+N in a power amplifier? Are you kidding me?

Look at the harmonic distortion. The worst case spike is below -130 dB! This is insanely good. Of course this type of SINAD (signal and noise ratio) crowns the Benchmark AHB2 as the best I have ever tested: 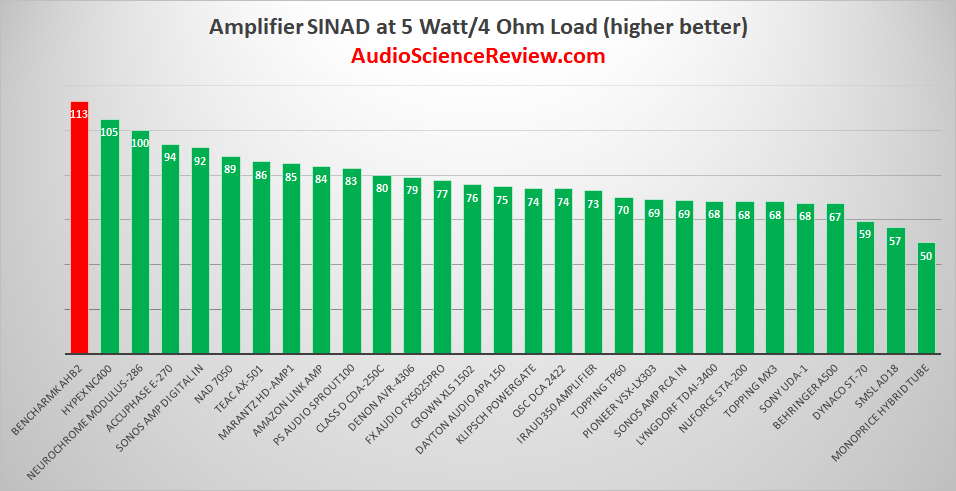 "Best attainable sound for a component of its kind, almost without practical considerations; "the least musical compromise." A Class A system is one for which you don't have to make a leap of faith to believe that you're hearing the real thing."