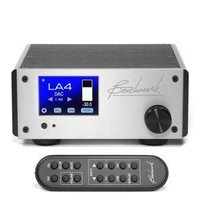 Benchmark Media Systems is a low-profile audio company, with its roots in professional electronics. In the past decade, Benchmark consumer products, especially its digital-analog converters, have achieved acclaim for ultra-low distortion and clean sound. While the company is very strongly engineering-oriented, it maintains that listening tests are critical to product development.

The HPA4 is Benchmark’s latest headphone amplifier. This amp is unusual in that it features a THX-888 Achromatic audio amplifier, which is claimed to reduce distortion by 20–40dB through a patented feed-forward design, resulting in the world’s most linear amplifier. In addition to the THX amp circuitry, Benchmark has gone slightly nuts (in a good way) with the volume control, offering 256 levels in 0.5dB steps via an array of relays. The idea is to limit noise and allow the user to dial-in volume precisely. I used the HPA4 with a Benchmark DAC3 L, which also features a precision method of setting its output to match the HPA4 for lowest noise.

Benchmark doesn’t stop there. The HPA4 is a high-voltage, high-current design to allow low-sensitivity headphones to work well. In addition, the damping factor is high (near zero ohms output impedance), with the aim of sounding the same with low-, medium-, and high-impedance headphones.

That’s all great, but many fancy-sounding circuits sound like dirt. Happily, that isn’t the case with this one. I thought the HPA4 sounded as good as any headphone amp I’ve heard for dynamic headphones, and it might be the best of the lot depending on your circumstances.

That “might be” clause deserves some explanation. The thing that the Benchmark amp does well is a bit hard to describe because it doesn’t happen with tweaks to frequency response. So, you can’t describe the HPA4’s magic in terms of “more bass” or “crisp treble.” The effect is more holistic than that.

To explain, first consider decent but not great amps, because a big element of the HPA4 is not committing the errors of lesser amps. With lesser amps, the sonic ingredients get somewhat blended, as with chili con carne, and less distinctly layered, like a hamburger with ketchup, a bun, and a side of beans. The second typical problem with lesser amps is that dynamics are slightly squashed. As we go up the amp-quality scale, the instruments are more distinctly rendered and more expressive, and at the top, as in the HPA4, this isn’t done by cheating with tweaked treble or bass. It is done by reducing distortions of many types and lowering noise.

The HPA4 is exceptionally good at presenting a layered, dynamic, yet relaxed sound. You can hear these rich results on, for example, Eliza Gilkyson’s Hard Times in Babylon (Red House), where the instruments not only are clearly differentiated but also sound fully rendered, as live instruments do. You also can hear the overtones of each instrument as they decay, which makes them sound more real. This sounds like audio nerdiness, but the payoff is that music sounds more alive so that you spend less time thinking about the sound and more time playing air guitar.

It would be nice to say that the sound of the HPA4 is the sound of nothing getting in the way of the music. However, I think some listeners would say that it has a certain, albeit subtle, character with tight bass and a very slight treble dryness. I’d comment that the bass is a feature, not a bug, but you need the right headphones. And the more I listened, the more I concluded that the dryness was actually the HPA4 revealing a character of the recording chain.

This adds up to a super-revealing amp that isn’t going to correct the mistakes of the rest of your system. I thought top-flight headphones sounded great as a result, but that doesn’t necessarily make it the amp for you. I, however, wish the review sample didn’t have to go back.